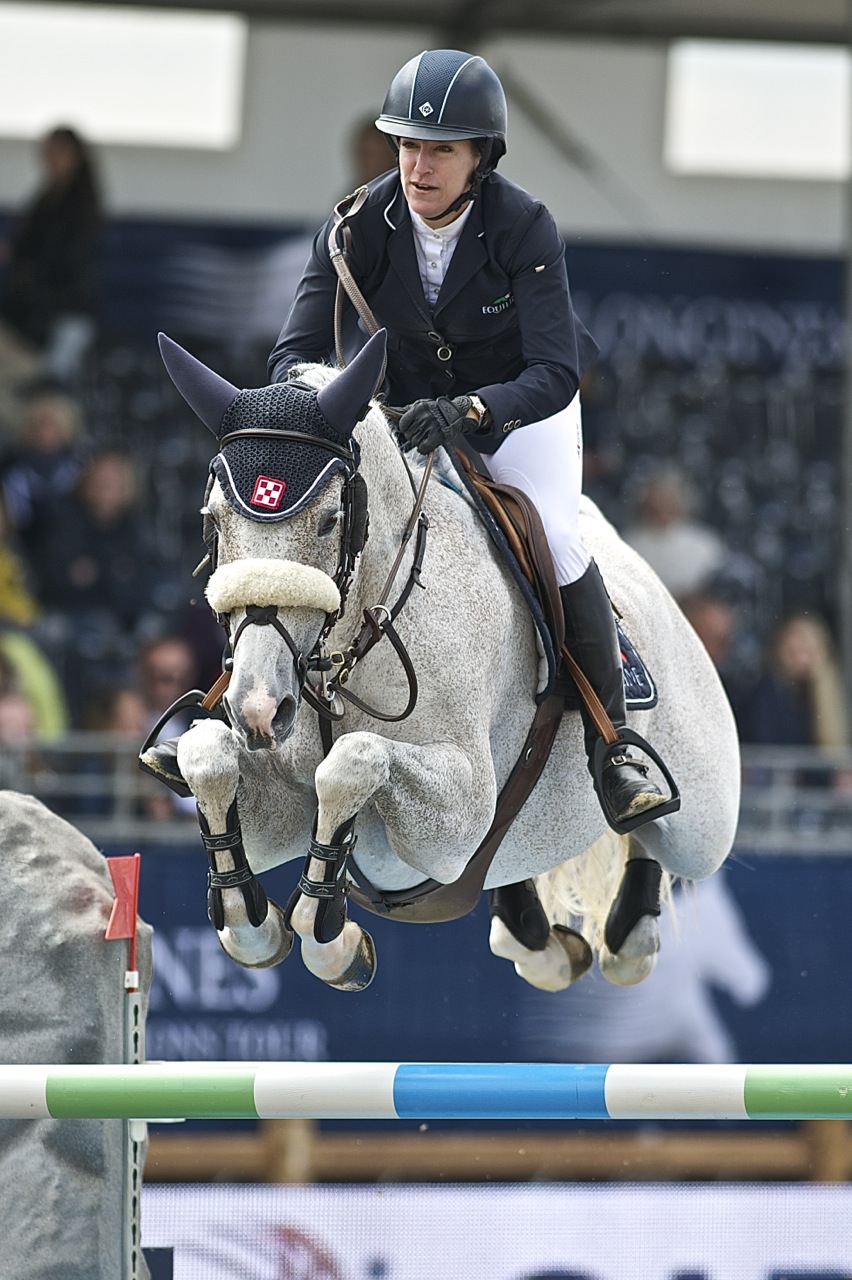 America’s Laura Kraut and her incredible 16-year-old gelding Cedric catapulted to the top of the Longines Global Champions Tour ranking winning the Grand Prix of Wiesbaden in front of a capacity crowd.

Laura is now in top spot on 77 points after narrowly beating two-times Champion Edwina Tops-Alexander and her 17-year-old superstar Cevo Itot du Chateau by only two tenths of a second. Laura now has her sights set on the fourth leg of the Tour at the new venue at the Olympic Park in London, the first-ever Longines Global Champions Tour event in Great Britain.

It was an all-star cast in the jump off with some of the fastest rider and horse combinations on the planet fighting for ranking points and €285,000 in Grand Prix prize money. Laura’s time of 45.12 trumped Edwina’s quick time of 45.35. Hans-Dieter Dreher was third on Magnus Romeo in 46.76 with Ludger Beerbaum, Gregory Wathelet and Alvaro de Miranda bringing up the rear in the jump off. The exceptional high calibre of competition meant only riders who jumped clear in the first round or with one time penalty had a chance of going forward to the second round.

Eurosport broadcast the dynamic sporting action live to a worldwide audience as the battle for the ranking intensifies in the run up to the fourth leg of the championship series.

A field of 50 horses, including 12 Olympic mounts, were on the start list for the 3rd Longines Global Champions Tour of the series. Bassem Hassan Mohammed of Qatar jumped the first clear on his 11-year-old Dutch bred mare Victoria. Following suit US Olympian Lauren Hough went clear on Quick Study. Germany’s Daniel Deusser and David Will jumped clear as well as Jane Richard Phillips for Switzerland. Jessica Springsteen and Athina Onassis de Miranda made supreme efforts despite scoring 4 faults on the big Schlosspark grass arena. Christian Ahlmann and Taloubet Z took over the fastest clear and was joined by fellow Germans Ludger Beerbaum and Philipp Weishaupt. Longines Global Champions Tour star performers Rolf-Goran Bengtsson, Edwina Tops-Alexander, Meredith Michaels-Beerbaum, Denis Lynch, Luciana Diniz, Laura Kraut, Alvaro de Miranda  and Hans-Dieter Dreher all managed Frank Rothenberger’s track with ease - with Alvaro clocking up the fastest time. Belgium’s leading rider Gregory Wathelet delivered the final clear score of the 1st round aboard Citizenguard Cadjanine Z. A number of leading riders had trouble at the double combination with heartbreak for some at the last fence.

The 18 best riders through to the 2nd round had all jumped clear except for Ireland’s Cameron Hanley on Michael Whitaker’s previous mount Antello Z, who started on 1 time fault and finished on 7 faults. Rolf-Goran Bengtsson, Bassem Hassan Mohammed and Daniel Deusser also disappointed with faults. Meredith Michaels-Beerbaum delivered the first double clear but had 1 time penalty on Bella Donna. Her brother-in-law Ludger Beerbaum took the lead on Chiara. Belgium’s Wathelet confirmed the jump off with a double clear on his Olympic team mare. Denis Lynch and All Star jumped an excellent second round but picked up an agonising time fault on the big striding stallion. The magical combination of Edwina Tops-Alexander and Cevo Itot du Chateau produced a beautiful clear round spicing up the jump off. Christian Ahlmann was unlucky at the final Casino fence but Hans-Dieter Dreher, winner of last year’s GP in Chantilly, went double clear putting him in second place. Super careful Cedric and Laura Kraut joined the jump off line up with Alvaro de Miranda on Rahmannhof’s Bogeno became the sixth double clear.

Four-time Olympic medallist and six-time European Champion Ludger Beerbaum was first in the jump off aboard his big-bodied grey mare Chiara. Riding a faultless an overjoyed Ludger said: “She couldn’t jump any better, she really got going.”  Gregory Wathelet took a risk to the vertical but paid the price with four faults in a really fast time. But it was 2011 and 2012 Champion Edwina and Itot who took over the lead with a great time of 45.35 seconds. Despite his best effort, Dreher finished in 46.76. With tension mounting in the packed grandstands Laura Kraut and Cedric, second in the Madrid Grand Prix, delivered a flawless jump off performance once again proving that such an experienced partnership often wins out on the most competitive international stage to seize victory. Alvaro de Miranda had the second fence down for four faults.

“I think it was a good second round course, I had a lot of confidence. I didn’t feel I was that efficient in the jump off, but I think the mad gallop to the last fence. I was a bit lucky, it made the difference. I am very pleased. It is Cedric’s fourth win on the Global Tour and I am very proud of him. We have a long way to go, but I am just pleased to start off as strong as I have. I am excited about all the upcoming events, London in particular.”

Asked about narrowly beating Edwina she said: “I have two really nice horses, Cedric and Jubilee, and if I can keep them healthy, I will give her a run if I can.”

Speaking about taking nine strides instead of eight during the jump off she said: “It probably cost me the first place. He did an amazing job to jump that fence.”

Asked about Itot’s performances so far this season she explained: “The faults in Madrid were my fault and in Hamburg I could have helped him a little more. My horse is just amazing. I am very lucky to have him.”

The ladies were faster than me today. When I went into the jump off I wanted to do 8 strides but on the way to the vertical I saw how big it was and thought no. I think it is always great, great sport on the GCT and we saw that today. Fast riders, it is like a championship.

To win the Longines Global Champions Tour you have to be a great champion rider and horse. It is important to be really diverse. We have had three grass arenas and the next will be London which is on sand and Cannes is also sand and in the evening. All different circumstances and that is the beauty of the Global Tour, nothing is the same and we have great locations. For us it is the first time in London. It is a horse country. We have great support from the Federation and from the riders and we are looking forward to it. For us it is an exciting moment. It will be very nice in front of the (Olympic) Stadium and we have a big expectation for London.

Jochen Kettner - Member of the Board of the WRFC

We are very happy to have the Tour here. It was the strongest field ever in our 77 years of history. The Tour brings good riders and is shown to millions of homes because of the media attention and international broadcasts.