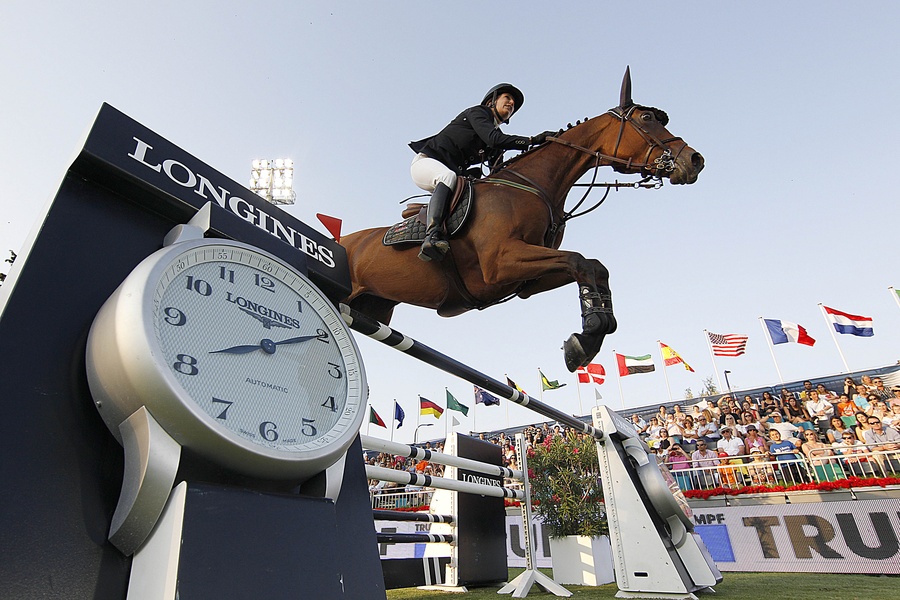 Laura Kraut ruthlessly piled on the pressure tonight with a fast win ahead of tomorrow’s Longines Global Champions Tour Grand Prix of Portugal.

The relentlessly fast US rider emphasised her position at the top of the overall ranking by winning the 5* jump off in Estoril on her 16-year-old mare Jubilee d’Ouilly in 41.94. Tomorrow evening she will need to hold off stiff competition from Christian Ahlmann, Edwina Tops-Alexander, William Funnell and home rider Luciana Diniz who are all snapping at her heels on the leader board.

Laura said: “I am thrilled. I was not expecting it but Jubilee is a great mare, she is brave and she is wonderful at night under the lights. I just went in and let her run and ended up winning.” Laura, who lives in south Florida, will be riding Jubilee tomorrow in the Grand Prix and pulling out all the stops to hold on to her No1 spot in the ranking. She said: “I will just keep my fingers crossed.”

Tonight’s €147,500 1.50m class was an important test ahead of the Grand Prix. Last year’s Estoril Grand Prix winner Philipp Weishaupt on Leoville was second in 42.41 with Michael Whitaker on Viking third in 43.39.

This evening's CSI5* International jumping competition 1.50, built by Frank Rothenberger, certainly offered its challenges. Most of which, had to do with the time. Set with an initial first round and a jump off, riders were required to jump the solid 1.50 track within the 74 second time allowed. This was no easy task!

Over half the class accumulated time faults. Surprisingly, six horse-and-combinations jumped clear only to be disappointed with a single time fault. Portugal's leading rider, Luciana Diniz was first to complete the 1.50 track and she was also the first to earn a clear round within the time allowed. Riding the agile Fit for Fun, Luciana made the track look rather easy however it was clear that rider's would have to stick to their planned track in order to avoid time faults.

It came as no surprise when top combinations such as Ben Maher with Tripple X III, Christian Ahlmann with Taloubet Z and Michael Whitaker with Viking joined the list of qualified combinations for the jump off. However, some surprising faults for Rolf-Goran Bengtsson aboard Quintero ASK as well as a nasty stop for Penelope Leprevost and Topinambour would leave certain key players from the second phase of competition.

Furthermore, Gerco Schroder and Jane Richard Phillips would also prove disappointed with frustrations through out the course.

Last week's winning combination in Monaco, Richard Spooner and Crsitallo, proved to be the final pair to jump a clear round within the time allowed. Bringing the total number of horses in the jump off to ten. Ten horses out of forty-five entries would keep Mr. Frank Rothenberger pleased with the final result.

Looking at the expected talent to battle it out in the jump off, Richard Spooner and leading ranked rider Laura Kraut, would certainly stand as strong opposition to fellow riders expecting to earn some valuable Longines ranking points.

Laura Kraut was third in the jump off and it was clear that the leading ranked rider had every intention to add just another Longines Global Champions Tour title to her resume. Crossing the finish line in a time of 41.94 seconds, Laura and Jubilee had set the time to beat. Would anyone be able to match her time and take over the lead?

Many tried, but none prevailed. Even the super-fast combination of Richard Spooner and Crsitallo earned a single fault jumping into the double combination. Philipp Weishaupt earned a tremendous result aboard his 13 year old stallion Leoville, landing in second place with a time of 42.41 seconds.

A rather timely win for the leading Longines Global Champions Tour rider as we look to tomorrow's Grand Prix of Estoril.