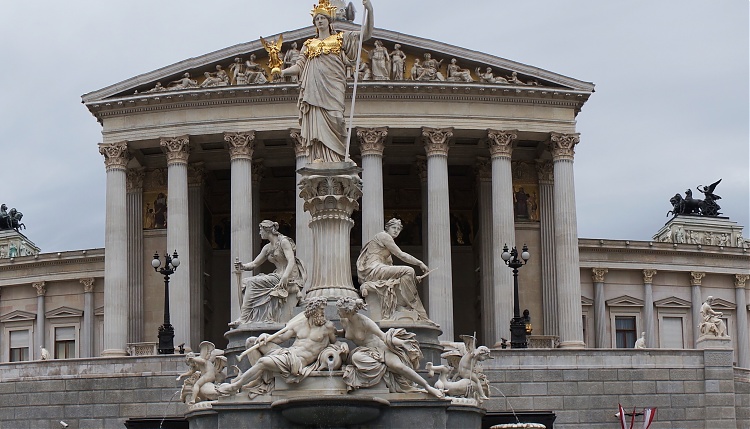 Vienna - a multi-faceted city. Prater with Riesenrad, the powerful St. Stephen's Cathedral, the magnificent Ringstrasse buildings with their nostalgic cafes, waltzes, wineries, theatre, opera, museums and culture everywhere. In 2012 Vienna celebrates two major anniversaries: marking 175 years since the birth of Empress Elisabeth and 150 years since the birth of the famous artist Gustav Klimt.

In recognition there will be an exhibition, the imposing Beethoven frieze from a totally new perspective and a musical-premièr. Vienna celebrates Klimt with totally new insights into his greatest works and a new musical production. In time for the anniversary, after 20 years again on the stage of a Vienna Theatre, the musical "Elisabeth".

The Vienna Prater – an institution! A visit to the Vienna Wurstelprater should not be missed – the Ferris wheel is the landmark of Vienna and one of the most visited sights of the city. A trip to one of the RR-cars opens up a unique view of the skyline of Vienna

The Naschmarkt – a colorful Multi-Kulti meeting place. Fruit, vegetables, Austrian specialities and exotic delights – Vienna's best-known market with its 120 stalls and bars is a paradise for gourmets, cooks, party people, and bargain hunters. A hustle and bustle is guaranteed above all on Saturday, when the weekly flea market from Sunrise until sunset art, antiques, vintage fashion and everyday objects are offered at. In one of the bars, which are housed in the wooden stands in the green market, you can chill out until midnight.

Viennese coffee house tradition – world famous cultural heritage since 2011 UNESCO. Imposing traditional cafés on the Ringstrasse with its imperial buildings, hidden art cafés in the winding streets of the city centre, and delicious sugar bakers tradition. You can start immediately in the vicinity of the Naschmarkt, where the Café Drechsler, a Viennese tradition of coffee houses, newly designed by star designer Sir Terence Conran, is ideal for a late or early breakfast – open weekends from 3 in the morning. A legend in Vienna is the Café Hawelka in a side street of the Graben, a meeting place for artists and writers – legendary the speciality of the House, the Buchteln (a typical pastries of dough from the Old Austrian Empire).

Sachertorte and apple strudel – Viennese tradition of baking. Not only because it is right in front of the Vienna City Hall Square, a recommendation, the Café Landtmann. In 1873 as Vienna's largest and most elegant Café location one of the old-established coffee houses in Vienna, opened. Sunday to Tuesday with live piano music from 8 pm, and always with the original Viennese apple strudel.

Try the famous Sachertorte cake.  Two of the famous Viennese confectioners claim the original recipe, but you decide best yourself:

The world's largest Klimt collection housed at the Belvedere, a magnificent Baroque palace, once a summer palace of Prince Eugene.

In the Jubilee year in a very special way enjoy one of the best known and most impressive works of Klimt's that 34-meter-long Beethoven frieze, an interpretation of Beethoven's 9th Symphony. In the Vienna Secession, where this is for the first time to visit Beethoven frieze at eye level. On a specially created platform you can see the work of art in 3-5 M above on eye level, near like never before.

Secession
Friedrichstraße 12
1010 Vienna
Until 13 January 2013
www.secession.at
Tuesday - Sunday 10.00 - 18.00
Because only a limited number of visitors can visit the frieze at the same time, there may be long waiting times.

Gustav Klimt – the musical. A musical journey in the art nouveau style and the eventful life of the artist there's a special place, the Vienna Künstlerhaus, a place of works by Klimt.

The original production at the coming of Vienna comes back after 20 years. From September 5,  "Elisabeth" the great musical around the Austrian empress Sisi will be back on a Vienna stage.