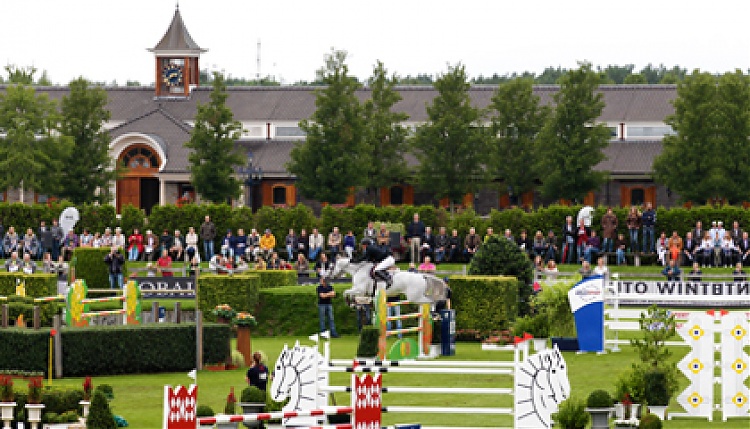 The home for the Global Champions Tour is always a favourite with riders, owners and sponsors alike. The superb facilities created by GCT founder and president Jan Tops have reached new heights each year since the first International Concours Valkenswaard 19 years ago. This year’s GCT Valkenswaard at the Stal Tops private equestrian estate will take place from August 17-19.
From the immaculate, manicured turf of the arenas to the superb VIP facilities, the event pulls out the stops in the pursuit of high quality service and entertainment. The VDL Groep Grand Prix will be one of the highlights of the ninth leg of the Global Champions Tour on Saturday August 18th. The Derby will create again a spectacular finish on Sunday August 19th.
The chic terraced marquee of the VIP enclosure was packed with riders, owners and sponsors and rock superstar Bruce Springsteen was among the guests enjoying the international sport and relaxed ambience. Show jumping fans mingled in the lounges and bars around the arena and shopped at the Place du Concours trade stands.
Before the GCT gets underway, the Valkenswaard Horse Festival begins on the weekend of the 10-12th August running simultaneously with the International Concours Valkenswaard when six competitions count towards important world ranking points.
Valkenswaard, near Eindhoven and close to the borders with Germany and Belgium, experiences a surge in tourism thanks to the 30,000 or more spectators who visit the Festival and GCT.
We look forward to welcoming you to GCT Valkenswaard.

Horse festival Valkenswaard is a unique event which takes place August 10-12 at the beautiful grounds of Stal Tops. The arenas are very much suited for the competitions, close to each other and to the stables. There are two grand warm up arenas, of which one partly covered, which can also be used during the week.
This year the Horse Festival Valkenswaard celebrates her 11th anniversary and for the fifth time simultaneously organised with the International Concours Valkenswaard during the second weekend.
The Horse Festival Valkenswaard has developed rapidly from an original idea to organise a tournament for friends into a recognised international event which brings riders, horses, grooms and visitors from all five continents to Valkenswaard! There are classes for international riders and special invitational riders with considerable prize money.
It is a great possibility for special invitational riders to gain international experience, for young horses to learn and for the international riders to compete six days in a period of ten days. Riders and visitors from all over the world enjoy two weekends of showjumping on the beautiful natural showgrounds with from the stables till the main arena everything at walking distance.